Fisheye Release Report plugin, adds the ability to list the Jiras and reviews and their states for a selected set of ChangeSets 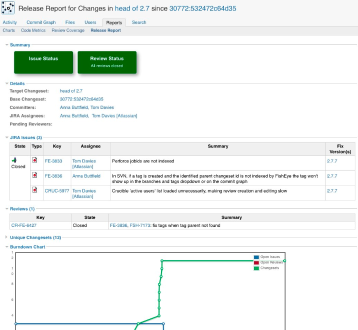 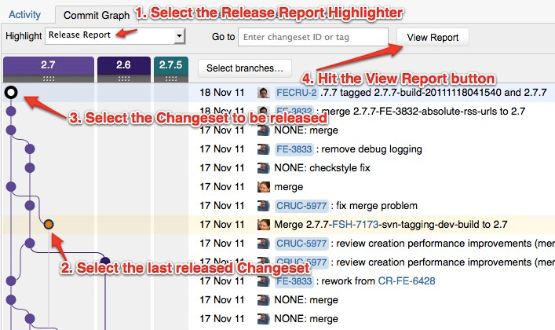 "Fisheye Release Report - Stay on top of your versions" : http://blogs.atlassian.com/2012/02/fisheye-git-svn-hg-release-report/

"Fisheye Release Report 2: You want to merge what?" : http://blogs.atlassian.com/2012/03/fisheye-release-report-merge-branch/

Adds a "Release Report" Highlighter to the commit graph - use this to select a "from" and "to" changeset (e.g. the last released commit and the current head of your branch) and hit the "report" button to get a report of the linked Jiras and reviews.

The Jira's referenced from the code are listed, grouped according to state, along with that Jira's set fix version (so you can validate this for the new release).

The screenshot shows a Mercurial commit graph, but it works equally well with other SCMs, except that it does not track merged commits in non-DVCS SCM's, like SVN, P4 and CVS.

This app is part of the Marketplace Bug Bounty Program. Learn more