This app will be retired by Jul 1 2022. Please find more details below

Keep your build plans in sync with Groovy or YAML 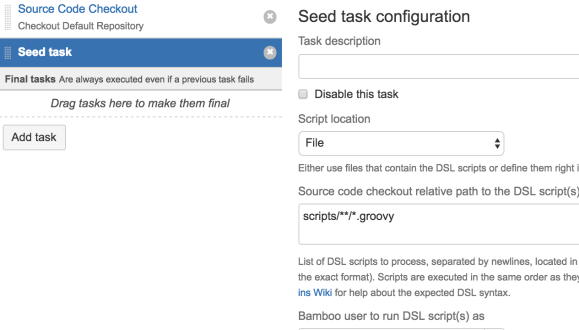 Code in your IDE and apply the scripts from a repo

Code and test your DSL/YAML scripts in your IDE and apply them from a repository. We provide code completion and syntax highlighting for IntelliJ. The app is also able to generate DSL scripts from existing plans. 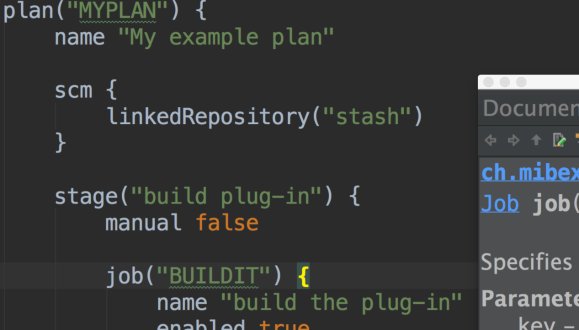 Administrate your Bamboo instance with Groovy

Do you have a lot of build jobs and don't want to manually maintain them? With this app you can administrate Bamboo with Groovy. Maintenance like replacing a build task in all build jobs was never that easy! 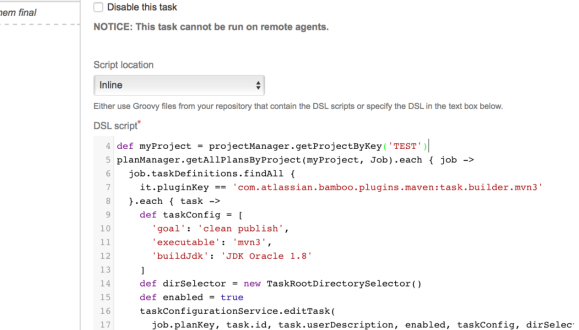 This app is similar to the well-known Job DSL plug-in for Jenkins. It allows you to specify your build plan configurations with a Groovy-based DSL or YAML. Simply code your build plan & deployment project configurations in your favourite IDE with code completion and documentation, add the apps seed task to a plan & link to the DSL/YAML files hosted in your source repository.

Find a getting started guide, real-world examples and more in our Wiki. Also, there is an an API documentation and an example repository to get started quickly.

The DSL allows you to script nearly everything Bamboo provides. Here you can see the DSL configuration for several build tasks.